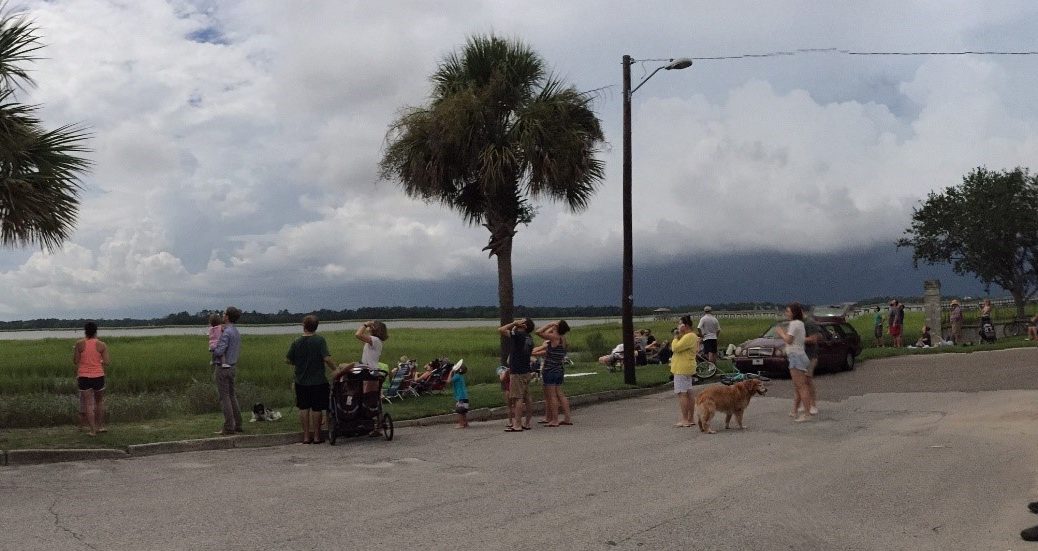 Editor’s Note: This article is a follow-up to two other TCS articles on the Great American Eclipse of 2017.

Newport, OR – The morning of the total solar eclipse started out the way many mornings on the coast in the summer do, foggy. I worried that I wouldn’t be able to fully experience the solar eclipse and that if I chose to drive further inland, I would be stuck in traffic and crowds. Instead, I decided to wait it out. By 8:30 am, the mist was burning off and by the time I brought my chair to the backyard at 9 am, the sun was fully out and there was barely a cloud in the sky! I couldn’t believe our luck!

My excitement intensified when I put on my solar eclipse glasses and saw the first sign of the eclipse starting around 9:04 am – a small chunk missing from the top right side of the sun, like someone had taken a small nibble out of a cookie. The moon was starting its movement across the sun and it was so exhilarating to see it happening right before my eyes! Over the next half hour, I continued to watch the sun disappear slowly behind the moon through my viewing glasses. After about 40-minutes or so, I noticed that the light was getting dimmer and the air temperature was getting colder. I had to put on more layers as I sat watching the light continue to dim and the temperature continue to drop.

Finally, around 10:15 am, the last sliver of the sun went behind the moon and I could take off my glasses to fully witness totality. The sky was instantly dark – comparable to the last moments of twilight – and the sun’s glow was shining around the moon. It was so incredibly wonderful! I wasn’t prepared for how amazing the moment of totality would be. It was truly awe-inspiring. While I was with only my husband in our backyard, we heard whoops and shouts of excitement across the neighborhood from others watching the event. Small fireworks starting going off nearby as people celebrated. You could feel the excitement in the air as we all stopped to observe this event.

And then, just like that, the sun started shining through the other side as the moment of totality ended and I put my glasses back on to watch the moon continue its journey the other way. The sunlight came back and over the next hour, the temperature got warmer and the light got stronger until the eclipse officially ended around 11:36 am in Newport and it was a normal sunny day again.

I watched the eclipse with my family and neighbors at the end of our street.  The street ends at the Ashley River so the view was great – plenty of open sky above and marsh below.  It was a cloudy afternoon with a thunderstorm threatening to move in, but we were able to see the eclipse and totality through the clouds and the occasional gap in the clouds.   My two daughters were so excited.  We talked about what we might see and feel and how to watch safely.  That morning they made eclipse cupcakes to share with fellow on-lookers.

Totality was 94 amazing seconds!  Not only was it awesome and a little eerie, but it was a sort of bonding experience with those around you.   As the sky grew darker, everyone became silent.  Street lights came on, the temperature dropped a few degrees, a few stars became visible and everyone was in awe.  Afterwards some people clapped, some left and went home, and my 8-year-old said “that was awesome!”  I feel so lucky to have experienced this with my family from my own front yard.

I should have stayed close to home. I missed the whole darn thing. As I was driving out to the eclipse party, the sky was getting darker (weather-related, not eclipse-related) and it started raining. Booo. The coast (where I came from) had some clouds, but stayed pretty clear. Inland (where I went), was stormy and cloudy the whole time. Eclipse-viewing-location fail.

But even though I didn’t see it, I did have a cool eclipse experience. Actually, I did get to see one little glimpse when I made a stop and whipped out my eclipse glasses on the way out to the party–that was cool. And even though the weather was a mixture of cloudy, sprinkling, and/or pouring the whole time, at the moment of totality, we still got to experience the “everything got dark” moment. Nighttime dark, not just overcast dark. And the temperature dropped what seemed like 15 degrees. We were all a little wet from the rain, and we all were freezing. It’s a strange feeling to get the chills outside in Charleston in August. To make it even more exciting, we were looking out over the Ashley River, and you could see the lightning bolts over the water and the thunder was rumbling. Spooky. We had fun talking about what people in ancient times must have thought when something like that happened. We decided they must have thought the world was ending. Even Lizzie and Ellie weren’t sure about the whole thing, and my lap was full of chilly and slightly freaked out little girls. Actually I think their biggest concern was that they might have to go to bed since it was dark. Haha.

So I didn’t see it, but I ‘experienced’ it. And it was a fun party, we grilled out, splashed around in the puddles, roasted marshmallows, and had fun looking up when and where we could see the next total eclipse.  And my kids still have their eye sight. So that’s a plus. Maybe in 2024 we’ll head to Texas or New York and try again.