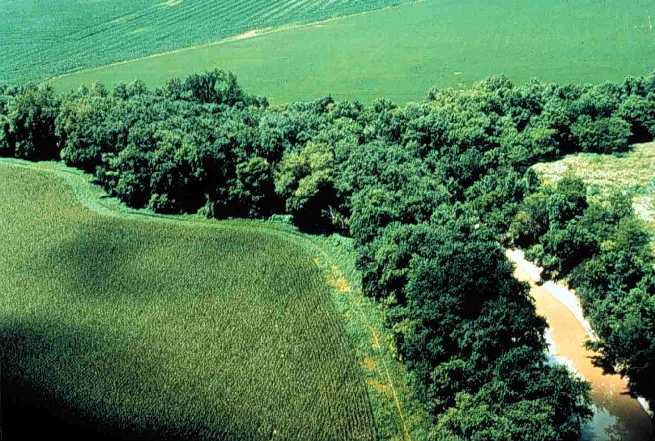 If you ask a handful of people what they think about wetland and riparian buffers, you will likely get quite a range of responses. Some identify a clear connection between buffers and their benefits for protecting clean water and other values; others see it as a significant impediment to development and growth; and many probably have no idea what you’re talking about.

Wetland and riparian buffers – areas around water bodies in which removal of vegetation and other activities are either entirely or partially restricted – are essentially a tool in the toolboxes of municipalities and states to protect clean water and healthy, functioning ecosystems. At face value, buffers might sound simple and straightforward – if you leave natural space, particularly with vegetation, between water resources and nearby human activities (e.g., residential or commercial development, agriculture, roadways, etc.), you might expect a number of benefits. Buffers are known for quite a few functions, from providing wildlife habitat to protecting clean water by intercepting nutrients and contaminants from runoff, reducing sediment inputs, slowing down flows, reducing water temperature by providing shade, and promoting infiltration. In addition to the associated benefits for drinking water supplies, buffers provide other human-related benefits like flood storage and bank stabilization, aesthetic value, and recreational activities. Some interesting studies have also shown that proximity to green space can improve quality of life and property values.

A significant amount of scientific research has been done to better understand and, in some cases, to quantify the ecological functions of buffers. And while the recommended width of the buffer can vary based on the primary functions that need protection, the benefits of buffers are pretty clear. However, things can get a little murky where buffers intersect with the human dimension. I’m working on a project with the Great Bay National Estuarine Research Reserve and other partners that’s looking at the scientific, regulatory, economic, and social dimensions of buffers in the Great Bay Estuary and its watershed. Here are a few lessons I’m learning about buffers:

1)      Buffer regulations are hard to implement.

In New Hampshire, municipalities have the option to develop and implement a wetland buffer ordinance. The state is responsible for enforcing the Shoreland Water Quality Protection Act (SWQPA), which provides for vegetated and managed buffer zones around certain surface rivers, lakes, and ponds. Municipalities can enact requirements above and beyond the SWQPA if they so choose.

There are a number of logistical challenges to implementing buffers at the local level. First, not all communities have a full-time code enforcement officer, and even if they do, this person has a lot of responsibilities in addition to enforcing buffers. Also, “policing” the town for buffer violations would be time consuming and probably not very popular. It often falls on neighbors to report complaints about activities or impacts in the buffer, which is not a very positive or proactive situation. Another challenge is knowing where the wetland boundaries are. Wetland boundaries can be dynamic, and the delineation can have a significant impact on how buffer limits are identified and how the site is ultimately designed.

As an example of the difficulty of implementing buffers, some communities have a “no clearing buffer zone” policy that restricts cutting of trees and vegetation to no more than 50% of the basal area per year. Enforcing this would necessitate knowing what the basal area is and monitoring change annually. (Basal Area is the area of the cross section of a tree stem, including the bark, generally at breast height about 4.5 feet above the ground.) This isn’t to say that communities shouldn’t have this kind of language in their ordinances – it does provide some teeth in the event of an obvious, egregious violation – but it’s important to acknowledge the challenges it presents in implementation.

Through this project, I’ve come to realize that buffers are not nearly as straightforward and innocuous as I initially (naively) thought! In some communities, buffer-related initiatives (e.g., efforts to either weaken or strengthen the buffer ordinance) have led to heated public meetings and contributed to strained relationships between municipal boards and even between neighbors. Some see buffers as a positive and necessary tool for protecting clean water and other values; others see buffers in a very negative light, as an infringement on property rights and property values, a restriction on development and growth, and an example of government overreach. The word “taking” comes up frequently, sometimes with threats of lawsuits.

Buffers are a way to protect shared public resources, but the immediate impact can feel unevenly dispersed across the community, as not all parcels have wetlands or shorefront. Sometimes the impacts can be uneven across the watershed as well; for example, downstream communities benefit from effective buffers implemented in communities upriver.

3)      The regulatory framework for buffers varies from community to community and state to state.

Buffer ordinances can vary significantly from one community to the next, from no buffer to a 25’ no cut-no disturbance buffer, to a 50’ or larger limited cut or managed buffer. Implementation capacity also varies between communities, contributing to different results despite what’s in the ordinance. Towns can even differ in their decision-making process, the amount of information they require from applicants, and the strictness with which ordinances are implemented. Buffer regulations and the decision-making process also vary significantly between states.

This variability can be challenging for developers who have to navigate different regulatory frameworks, and also for newcomers who move to a new town and may not be aware that the requirements and processes might be different. In addition, this can create a sense of competition between towns, or a fear, warranted or not, on the part of some stakeholders who want to see more development and growth in their town that if their buffer regulations are stricter than those of neighboring towns, developers may look elsewhere.

Whether intentional or not, buffers are tied to people’s visions for the town’s future and perspectives about growth. There are inevitably some differences of opinion about this, particularly as towns are facing rising development pressures and seeing influxes of newcomers who lack the tie to the town’s past and character. Also, support for protective measures like buffers depends on an underlying sense of connection to natural resources and an understanding of their benefits. For example, one key benefit of buffers is protection of drinking water sources. However, if people lack an awareness of where their drinking water comes from, it might be difficult to see the direct benefits of buffers.

5)      Buffers also bring up the issue of shifting baselines, a challenge that often arises in many coastal management issues.

As memory of the past state of natural resources is lost, the connection to the reasoning and need for buffers can weaken. Many communities are seeing changing population dynamics, with a combination of longtime residents and newcomers. The newcomers may not be aware of how abundant resources were or how healthy ecosystems were in that area’s past, and so the current state becomes their baseline. And with turnover in decision-makers, institutional memory and the original rationale for buffer regulations can get lost as well.

A way forward for buffers?

If nothing else, I hope that this article makes clear how complex buffers can be. There are many different layers – regulatory, ecological, and social – and it’s important to understand them all in order to effectively use buffers as a tool to protect water resources and maintain the many functions they provide. Buffers offer a low-cost way to protect drinking water, reduce damage from flooding and erosion, and reduce the cost of water treatment and stormwater management, as well as a host of other benefits. It’s clear that we need to promote a broad, underlying awareness of the importance of these ecosystem services in order to foster support for buffers.

Comment below to share your stories about how buffers work in your state or communities! What are the perspectives and concerns related to buffers that you encounter? What are the challenges? Any ideas for innovative approaches to buffers? What resources or information would be helpful?

Lisa Graichen works as a Community Engagement Specialist with the Great Bay National Estuarine Research Reserve in New Hampshire.  She is working on a number of projects, including Buffer Options for the Bay. Lisa has been with the Reserve since September 2015. She also is a member of the TCS Communications Subcommittee and a volunteer with the Stewardship Network of New England. Lisa is a 2015 graduate of the TIDES program (Training for the Integration of Decision-making and Ecosystem Science) at the University of New Hampshire, a master’s program focusing on coastal ecosystem management, during which she interned at the Hudson River National Estuarine Research Reserve in New York. Outside of the office, Lisa enjoys hiking with her dog Baxter and exploring local rivers by kayak or paddleboard.