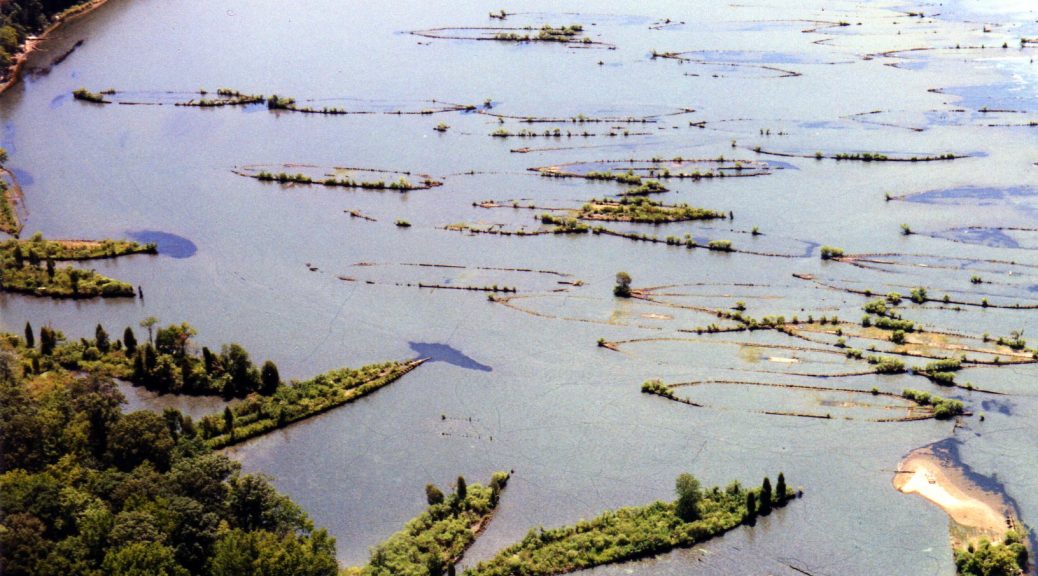 By Kim Hernandez, Coastal Resources Planner at the Maryland Department of Natural Resources. This article is also published on Marine Science Today as part of a TCS-MST Collaboration initiated earlier this year.

In the tidal Potomac River, about 30 miles downstream from Washington D.C., lay the remains of the “Ghost Fleet of Mallows Bay” – over 100 wooden steamships built for the U.S. Emergency Fleet as part of the nation’s engagement in World War I. Dozens of other historic maritime resources also rest in the Potomac River, as well as 12,000 year old archaeological artifacts dating back to some of the region’s earliest Native American cultures. The significance of the area was enough to warrant its listing on the National Register of Historic Places in 2015. Now, thanks to abundant community support, it is in the running to become Maryland’s first national marine sanctuary.

The National Oceanic and Atmospheric Administration (NOAA), the federal agency with authority to designate an area as a sanctuary, for the first time in two decades has been seeking engagement from the American public to nominate areas with significant community support. As nominations are submitted, NOAA reviews each one in several steps and those that pass the review will be added to an inventory of areas NOAA may consider for potential designation as national marine sanctuaries.

The Mallows Bay-Potomac River National Marine Sanctuary nomination was submitted in September 2014 by the State of Maryland with a broad-base of local government and non-government support. The nomination itself included letters of support from over 60 community organizations and individuals. Sanctuary designation would allow NOAA programs to supplement and complement existing state and local programs that aim to protect, study, interpret, and manage this unique area.

In addition to protecting the fragile remains of the shipwrecks, the nomination also cites opportunities to expand public access, recreation, tourism, research, and education. The area is contiguous to the Captain John Smith Chesapeake National Historic Trail, the Star Spangled Banner National Historic Trail, the Potomac Heritage National Scenic Trail and the Lower Potomac Water Trail, allowing paddlers a unique glimpse into our Nation’s history.  Below the water, the area offers important habitat for popular recreational fisheries, including Striped Bass and White Perch. Above the water, ghostly shipwreck hulls jut out and provide perches for migrating waterfowl and thriving populations of Bald Eagles. The middle Potomac River truly is a historic and ecological treasure.

Four months after the original nomination was submitted, NOAA announced it would add the area to the inventory of nominations that are eligible for designation. It is important to note that the original nomination in September 2014 did not designate anything; it only suggested that NOAA consider designation. The January 2015 announcement meant NOAA would now seriously consider a sanctuary in the Potomac River – a huge step forward for the dozens of community supporters.

Nationally, the designation process is a separate public process that, by law, is highly public and participatory and often takes several years to complete. Nominated areas go through four main steps with NOAA before it is determined whether they are designated or not: (1) Scoping: NOAA announces its intent to designate a new national marine sanctuary and asks the public for input on potential boundaries, resources that could be protected, issues NOAA should consider and any information that should be included in the resource analysis; (2) Sanctuary Proposal: NOAA prepares draft designation documents including a draft management plan, draft environmental impact statement that analyzes a range of alternatives, proposed regulations and proposed boundaries; (3) Public Review: The public, agency partners, tribes and other stakeholders provide input on the draft documents. NOAA considers all input and determines appropriate changes; and (4) Sanctuary Designation: NOAA makes a final decision and prepares final documents. Before the designation becomes effective, the Governor reviews the documents. Congress also has the opportunity to review the documents.

For Mallow’s Bay, NOAA considered the nomination action until October 2015 when they issued a formal “Notice of Intent” to designate. Along with the Wisconsin – Lake Michigan National Marine Sanctuary, which is going through this same designation process right now, the Potomac River has the potential to be the home of one of the first new national marine sanctuaries designated in nearly 20 years.

In early spring 2016, a federal, state, and local government committee formed to grapple with all of possible management questions a sanctuary designation could spark. Currently, that committee is developing the draft documents required for the sanctuary – including an environmental impact statement and management plan. If all goes as planned, drafts will be available for public comment sometime in late 2016 and designation of this World War I paragon will coincide with the 100-year anniversary of the United States’ entry into the world war, in April 2017.

If designated, the proposed sanctuary would be managed jointly by NOAA, the State of Maryland, and Charles County, Maryland. The original coalition of organizations and individuals at local, state, regional, and national levels that supported the nomination –  including elected officials, businesses, Native Americans, environmental, recreation, conservation, fishing, tourism, museums, historical societies, and education groups – will continue to help mold the vision for the sanctuary and ensure effective protection and management moving forward.

Kim Hernandez is a Coastal Resources Planner with the Maryland Department of Natural Resources Chesapeake and Coastal Service. She assists with the coordination of state and regional ocean planning, with the planning and implementation of the Mallows Bay – Potomac River National Marine Sanctuary, and with programs that address coastal hazards and climate resiliency. She also serves as the agency representative on a number of planning bodies and stakeholder groups throughout the Mid-Atlantic region.

Editor’s Note: TCS members working on a national marine sanctuary nomination are invited to contribute a story on your proposed site and current efforts moving through the nomination process. Story ideas or full submissions can be sent to the TCS Communications Chair at kaseyrjacobs (at) gmail (dot) com.